Well, we have chosen our theme for our 2013 exhibition and it is, appropriately, The Gathering. We will launch the exhibition on Friday the 15th March and run over that weekend until Bank Holiday Monday the 18th.

There will be the usual mix of literature, sculpture, photography, installations, textile work, video and paintings, live readings, music from The Bee Jazzband, and on the Friday night, a glass of wine and nibbles.

Watch this space! We look forward to welcoming you to our emigration and homecoming themed exhibition.
Posted by Group 8 at 3:24 AM No comments:

Email ThisBlogThis!Share to TwitterShare to FacebookShare to Pinterest
Labels: exhibition, The Gathering

Group 8 reconvenes tonight for the new 'term'. Looking forward to planning next year's theme and exhibition.
Posted by Group 8 at 11:11 AM No comments:

MADE IN BALLINASLOE - POETRY VIDEO

Here is Nuala Ní Chonchúir and Úna Spain's contribution to the Group 8 exhibition (on all this week!), Made in Ballinasloe. Nuala's poetry, Úna's images and, towards the end, video footage.

Email ThisBlogThis!Share to TwitterShare to FacebookShare to Pinterest
Labels: exhibition, Made in Ballinasloe, poetry, Salmon Poetry, The Juno Charm, YouTube

An enormous crowd turned out last night to the opening of Made in Ballinasloe. We were delighted to have the support of so many people. The Bee Jazz Band played beautiful music; Michael McCullagh launched the exhibition graciously; Nuala Ní Chonchúir and Fiona Keane read; everyone enjoyed food and wine; and the exhibition looked wonderful.

Group 8 sends special thanks to Hayden's Hotel who were very supportive and helpful - we really appreciated it. And to Úna O'Connor who sold the catalogue.

THE SET UP - Made in Ballinasloe

A sneak preview of Made in Ballinasloe via our set-up pics. This is just some of the work. See you tonight at 7pm to see all of the beautiful work we have in store for you. The visual poetry that Úna Spain and Nuala Ní Chonchúir collaborated on will be on YouTube shortly. 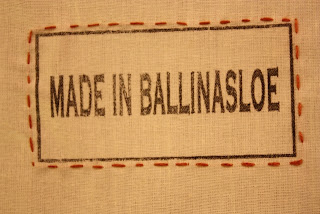 Email ThisBlogThis!Share to TwitterShare to FacebookShare to Pinterest
Labels: exhibition, Hayden's Hotel, Made in Ballinasloe, photos, set up

MADE IN BALLINASLOE - exhibition 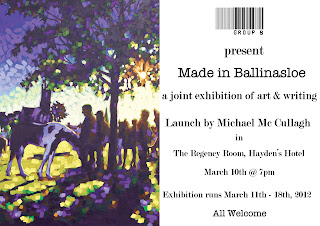 Group 8 is delighted to announce the opening of its 3rd annual exhibition at Hayden's Hotel, Ballinasloe, on Saturday 10th March at 7pm. All welcome!

The exhibition runs from the 10th to 18th March 2012, including Saint Patrick's Day.

Admission free and all are welcome.

Our annual literary event - this year a Fiction Writing Workshop facilitated by Nuala Ní Chonchúir - was fully attended today and everyone got great work done. Thanks to the 12 people who took part for making it such an enjoyable event. Here are some pictures of the participants hard at work: 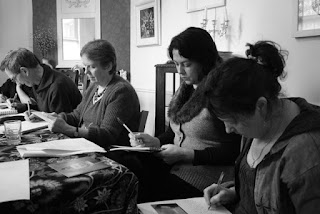 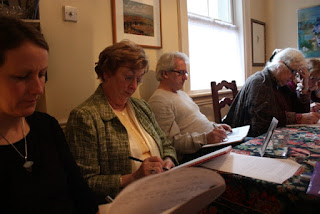 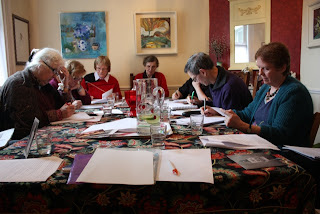 Group 8 are now nine and to celebrate the arrival of our two new members, Fiona Glynn and John Soden, here are bio notes for each member of the collective:

Tommy Campbell is a sculptor working in the medium of Bog Oak. He is inspired by his surroundings and the materials he uses. Mainly a self-taught artist, he has had workshops with Dutch sculptor Peter Kooning and the late Brian Little.

Brendan Greally graduated from GMIT in 1998 with a Diploma in Art & Design and from Crawford College of Art & Design in 1999 with a Degree in Fineart. He is a highly versatile painter who engages with a variety of thematics that share a common thread – that of his immediate environment. The artistic treatment of his subject matter is carefully, and consistently considered in his sophisticated methods of paint application.

Grellan Ganly has a Degree in Art & Design from GMIT. His work is heavily influenced by history, particularly that of Irish folklore and Celtic mythology. He works in both oil painting and kiln fired ceramics. Both media possess an underlying fluidity and mystery that combine in a way that constantly challenges the viewer as to the various layers of meaning contained in his work.

Fiona Glynn is a Textile Artist who graduated with a Degree in Art and Design from GMIT in 2006 and an Honours Degree in textiles from GMIT in 2007. She also completed a H. Dip Art Education in Crawford College of Art and Design. Her main area of inspiration is the natural landscape and the intermingling of nature with modern building and technology. She works primarily in the medium of textiles and predominantly through machine free hand embroidery.

Joyce Little is a visual artist working in the medium of paint, print and installation. Her area of interest is that of the contemporary woman. Her work is thought provoking, culturally critical and at times irreverently humorous and satirical. She studied in Grafton Academy of Fashion Design, NCAD, GMIT, and she holds an MA in Visual Arts Practice from IADT. She recently attained a Diploma in Youth Arts from NUI Maynooth.

Zara Little-Campbell is a writer from Ballinasloe. She attained an MA in Creative Writing from Trinity College, Carmarthen in Wales. Her poetry has been published in Sigla and Crannóg. She co-edited Rewind and a selection of her poetry was published in the same anthology. Zara won the Jonathan Swift Award for poetry in 2008 with her poem ‘Sycamore Trees’ and was shortlisted for the Short Story Award in 2009.

Nuala Ní Chonchúir is a short story writer, novelist and poet, born in Dublin and living in Ballinasloe. Her third poetry collection The Juno Charm is just out from Salmon Poetry. Her fourth short story collection Mother America will be published by New Island in May 2012. Nuala’s story ‘Peach’, in the current issue of Prairie Schooner, has been nominated for a Pushcart Prize. www.nualanichonchuir.com

John Soden was born in 1973. He is a self taught artist and from an early age had a keen interest in drawing and painting. He studied Art at Leaving Cert level at St. Joseph’s College, Ballinasloe. John paints in oils which are best suited to his impressionistic and expressive style of painting. He has exhibited pieces at the Kilconnell Community Arts Event in 2010 and held a solo exhibition of his work in April 2011, as part of the East Galway Art Trail. John also exhibited paintings in Anton’s café, Galway in September 2011.

Úna Spain graduated from GMIT in 1997 with a Diploma in Art & Design and was awarded an Honours Degree in Photography from DIT in 2009. Her most recent body of work consists of photography, Super 8 film and a limited edition artists book collectively entitled Marking Time which looked at three ‘erstwhile’ sites in Ballinasloe and people formerly associated with them. The critic Aidan Dunne described this work as a ‘brilliant, composite insight into the social and psychological reality of change on a local scale in Ireland’ (Irish Times, June 17, 2009). Úna exhibited at Tulca and The Kenny Gallery in 2011.

GROUP 8 NOMINATED FOR A HERITAGE AWARD

We have been nominated for a Heritage Award in Galway County (big thanks to whoever it was who nominated us!). We are toddling along to the awards ceremony this Thursday in The Meadowcourt Hotel, Loughrea. We'll let you know if we emerge triumphant!

In other news, group member Nuala Ní Chonchúir is running a fiction workshop this Saturday on behalf of Group 8, in Ballinasloe. The workshop is fully booked and has a waiting list, and Nuala is looking forward to spending Saturday morning working on fiction writing with the 12 participants.

More news soon on our forthcoming exhibition 'Made in Ballinasloe' which will run for a week from March the 10th in Hayden's Hotel.
Posted by Group 8 at 6:56 AM No comments: